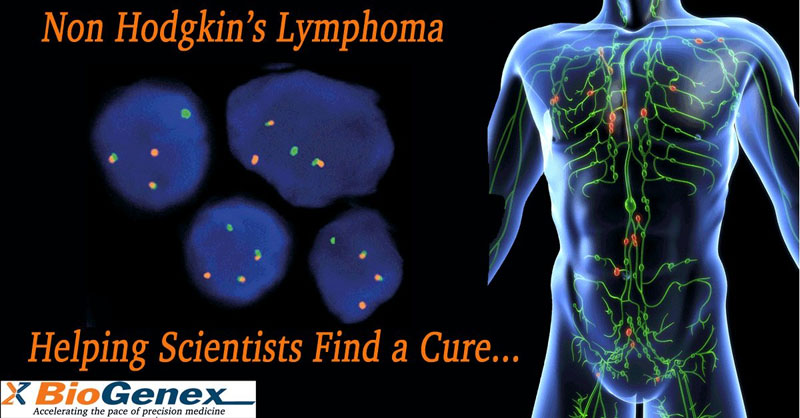 In a new study, published in Nature’s Blood Cancer Journal, researchers using the Xmatrx FISH automation system identified MCL-1 as a target for therapy in resistant Non-Hodgkin’s lymphoma (NHL). NHL is a type of cancer that starts in the lymphatic system, a part of the immune system, and can spread to various organs including bone marrow, liver and brain. NHL is one of the most common cancers in the United States, accounting for about 4% of all cancers. In 2016 an estimated 73,000 people will be diagnosed with NHL and 20,000 people will die from this cancer in the US. On average, the survival rate for people with NHL (stages I-IV) over five years is 69% and over ten years drops to 59%. Symptoms include swollen lymph nodes, fever, belly pain, or chest pain while treatments may include chemotherapy, radiation therapy, stem-cell transplant, or medications. Since there is not a standard screening test for non-symptomatic individuals, NHL is often not diagnosed until the later stages, which have less favorable prognosis rates.

The t(14; 18) chromosomal translocation (an abnormal exchange of genetic material between non-homologous chromosomes) is a biomarker of certain types of NHL, and when present results in a hyperexpression of the B-cell lymphoma protein-2 (BCL-2).  This protein works to inhibit cell death, and when overexpressed is associated with a lower survival rate.  Current drugs that target BCL-2 are now being evaluated in clinical trials; Navitoclax (ABT-263) is a broad spectrum inhibitor that targets BCL-2, BCL-XL and BCL-W, but can lead to BCL-XL-driven thrombocytopenia – a serious life threatening adverse effect. Venetoclax is a specific BCL-2 inhibitor that is better tolerated, but despite improved response rates some cancers remain resistant to both these drugs.

MCL-1 is a known resistance factor to both drugs, and in the new study scientists at AbbVie sought to identify and block MCL-1 and other resistance factors in order to increase the efficacy of the existing drugs.  They performed Fluorescent In Situ Hybridization (FISH*) using the Biogenex Xmatrx Automated platform to verify the presence of the t(14; 18) chromosomal translocation (and therefore the upregulation of BCL-2). Using selective inhibitors for MCL-1 or BCL-XL in combination with navitoclax and venetoclax they showed that inhibiting MCL-1 increases the sensitivity of cancer cell lines with a high BCL-2 expression to both drugs. These data strongly suggest that co-inhibition of MCL-1 can improve the clinical efficacy of venetoclax. Furthermore, this study also identifies a patient population (BCL2Low) that could potentially benefit from BCL-XL (navitoclax)-driven combination therapy.

* FISH is a robust technique used for the detection of chromosomal aberrations and is invaluable for both research and diagnosis of solid tumors and hematological malignancies.  In addition to the fully-automated FISH system used by AbbVie (Xmatrx Infinity), BioGenex recently launched the Integrated eFISHiency system which includes: Xmatrx Nano, the world first affordable FISH automation system that fits on a bench-top, 65 highly specific FISH probes and FISH visualization kits for FFPE and Cell sample with validated protocols. BioGenex FISH probes are processed by a unique Repeat Subtraction Technique resulting in advanced specificity and improved signal intensity and their performance is guaranteed.

BioGenex designs, develops, and commercializes advanced fully-automated molecular pathology systems for cancer diagnosis, prognosis, personalized medicine, and life science research. The recent introduction of our eFISHency integrated workflow solution for FISH laboratories and miRNA system for characterization of CUP and for undifferentiated tumors is a game changer that has no rival in the industry. Our fully-automated molecular pathology workstations are the most advanced system globally. Our spirit of innovation drives us to deliver cutting edge technology, years ahead of our competition, and the finest systems for life Science research and diagnostics.